Client Profile
The largest US manufacturer of keyboard instruments, Baldwin is best known for its concert and upright pianos sold under the Baldwin, Chickering and Wurlitzer names. The company filed for protection under Chapter 11 of the U.S. Bankruptcy Code.
Situation
SSG was engaged in September 2001 to explore strategic alternatives for Baldwin Piano & Organ Company (Ticker: BPAO), debtor-in-possession, including refinancing as well as sale under Section 363 of the Bankruptcy Code.
Solution
SSG created a competitive process for the 363 auction in 41 days by bringing in three bidders.GE Capital, the senior creditor, structured a bid to maximize value to the estate. Subsequently, Gibson Guitar Corporation reached an agreement to purchase the rights of the assets of Baldwin Piano & Organ Company from GE Capital. 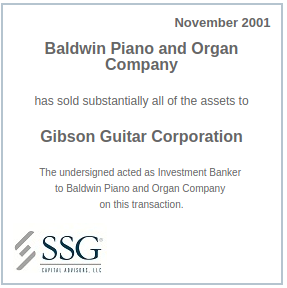