Client Profile
Bridgeport Machines, Inc. is a leading manufacturer of metal cutting machine tools, such as manual and CNC machining centers, milling machines and lathes. Since its establishment in 1938, Bridgeport has become one of the most recognized industrial brands in the world. The Company is based in Bridgeport, Connecticut, with European headquarters in Leicester, England. There are additional manufacturing facilities in Kempten, Germany and Elgin, Illinois.
Situation
The global recession in the manufacturing economy in 2001 and 2002 and the related dramatic deterioration in the demand for capital equipment worldwide resulted in a substantial decline in Bridgeport sales, resulting in the Company filing for protection under Chapter 11 of the U.S. Bankruptcy Code.
Solution
SSG was retained in March 2002 to sell Bridgeport and quickly went to market to solicit offers for all or parts of the business. A Section 363 auction was held in July 2002 with five participants involved in the bidding. A subsidiary of American Capital Strategies was ultimately deemed the highest and best bidder. The transaction closed in September 2002. 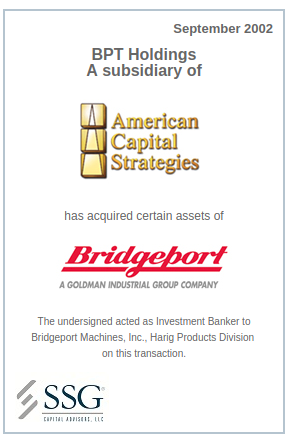