Client Profile
In October of 2004 Buehler of Kentucky, LLC (“Buehler’s Market” or the “Company”), an affiliate of Buehler Foods Inc., acquired sixteen grocery stores from Winn Dixie Stores, Inc. The acquisition was comprised of fifteen stores located in the Louisville, St. Matthews, Valley Station, Shelbyville, and Mt.Washington, Kentucky areas and one store in Jeffersonville, Indiana, of which ten were still in operation. Buehler’s Market wanted the opportunity to bring its retail grocery format to Louisville and the surrounding areas. Geographically, as well as strategically, the Company viewed the acquisition as a natural progression of growth. The Company’s business model was, when possible, to consolidate food and drug stores under one roof. Most of the stores included a complete grocery offering, prescription drugs and an expanded section of cosmetics and general merchandise in addition to specialty departments such as service seafood and meat, bakery, lobby/video, service delicatessen, liquor and floral. Many also offered meal centers, party supply centers, coffee bars, in-store banks and destination categories for beverages, snacks, pet care products, paper products and baby care merchandise. These services and product offerings provided for easy, one-stop shopping. Combination food-drug stores are typically located in neighborhood shopping centers and range in size from 30,000 to 55,000 square feet.
Situation
Buehler’s Market filed for protection under Chapter 11 of the U.S. Bankruptcy Code on May 4, 2005. The filing was made in the U.S. Bankruptcy Court for the Southern District of Indiana, Evansville Division. Buehler’s Market continued to operate its business and manage its properties as a debtor-in-possession under the Bankruptcy Code. The filing is, in part, related to about $7 million in lost revenue resulting from unanticipated delays in assuming control of the sixteen former Winn-Dixie stores in the Louisville markets as well as delays and losses related to the Company’s implementation of its capital expenditure program. Buehler’s Market acquired the stores with the intention of entering into an aggressive capital expenditure and store conversion program across all the units. The Company did initiate the conversion program; however, delays in closing the transaction and the related lost revenues noted above quickly manifested themselves in the form of operating losses and significant strains on liquidity and working capital. As a result, the Company closed six stores in the Louisville market and made the strategic decision to sell the remaining stores as a going concern in whole or in part.
Solution
On August 10, 2005, the Company retained SSG Capital Advisors, L.P. as its exclusive investment banker regarding a potential sale of the remaining ten Buehler’s Market locations acquired through the Winn-Dixie acquisition (the “Transaction”). Bidding procedures for the Buehler’s Market Section 363 sale process were filed with the Bankruptcy Court with four separate sale transactions for certain assets between four separate buyers and Buehler’s Market. The last of the sales of Buehler’s Market’s assets was approved by the Court on November 9, 2005 and the last transaction closed on November21, 2005. The SSG professionals involved in the transaction were Robert C. Smith (Managing Director), T.J. Haas (Vice President) and Matthew T. Sobieralski (Associate). 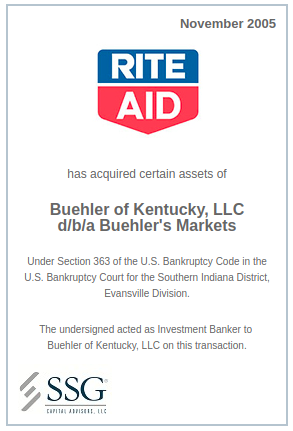