Client Profile
Centis Consumer Products (“CPD”), with operating divisions in the US, Canada, and Mexico, is a wholly-owned subsidiary of Centis, Inc Debtor-In-Possession. CPD is a leading designer and manufacturer of mass-market office and school supplies including folders, binders, index tabs, book covers and sheet protectors, produces under the Duo-Tang, JM, PostFax and Century Craft brand names.
Situation
As a result of depressed macro-economic conditions, CPD’s parent, Centis Inc., had faced significant capital constraints, which left CPD unable to fully realize its profit potential for an extended period of time. Centis Inc., together with its domestic subsidiaries (including Centis Consumer Products Inc.), filed for protection under Chapter 11 of the United States bankruptcy code on July 31, 2002.
Solution
SSG was retained in July 2002 to sell all of the divisions of Centis Inc., which include the Consumer Products Division, G. Neil – a leading human resources solutions company, and New Century Direct – a direct mail operation. SSG quickly marketed all of the divisions of Centis, Inc. in parallel processes. The six-month marketing process for CPD was concluded with a Section 363 auction in February 2003. Ultimately, a bid by Esselte Corporation was deemed to be the highest and best offer. The sale included the stock of Centis Canada, Inc. and certain assets of Siglo Productos de Mexico, a Mexican subsidiary of Centis, Inc. The assets were sold as a going concern for a total consideration of $32 Million. The transaction closed in March 2003. 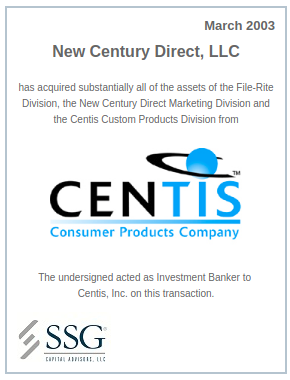