Client Profile
Country Home Bakers, Inc. is a manufacturer of frozen pies, breads and cookies, which are sold through both retail and foodservice distribution channels. The pie division sells a wide variety of private-label pies primarily to the in-store bakeries of supermarkets and other retailers.
Situation
The Company embarked on an aggressive growth strategy in 2001 and 2002 that included the construction of a new frozen pie manufacturing facility. The resultant leverage used to fund the new facility, coupled with expected volume increases that failed to materialize ultimately resulted in the Company filing for protection under Chapter 11 of the U.S. Bankruptcy Code on February 14, 2003.
Solution
SSG was retained to sell the pie division as well as the Company’s United Kingdom-based frozen cookie division. SSG went to market and quickly selected a platform bidder for a Section 363 auction of the assets of the pie division. SSG also attracted multiple competing bidders, leading to an auction comprised of 28 bids and a 35% increase in the purchase price above the platform bid. The transaction closed in June 2003. 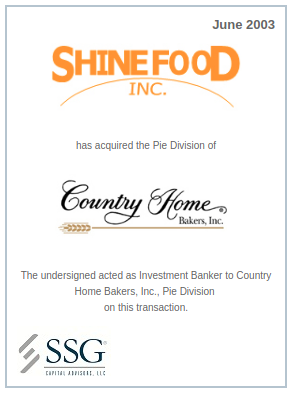