Client Profile
Country Home Bakers, Inc. (“Country Home” or the “Company”)is a manufacturer of a broad array of frozen bakery products. The Atlanta Metropolitan operation (“Metro”) sells a variety of cookies, bread and biscuits through both retail and foodservice distribution channels.
Situation
Issues related to a sister business of the Metro operation resulted in the parent company filing for protection under Chapter 11 of the U.S. Bankruptcy Code on February 14, 2003. The sale of Metro, along with Country Home’s other businesses in separate transactions, were required to provide liquidity for the stakeholders and facilitate an emergence from bankruptcy.
Solution
After selling the Company’s pie division and its United Kingdom-based frozen cookie division, SSG was retained to sell Metro, which was the final piece of the business. SSG went to market and quickly selected a platform bidder for a Section 363 auction. SSG also attracted multiple competing bidders, leading to an auction comprised of 29 bids and a 65% increase in the purchase price above the platform bid. The Metro operation was ultimately acquired by J&J Snack Foods Corp. (NASDAQ: JJSF) and the transaction closed in January 2004. 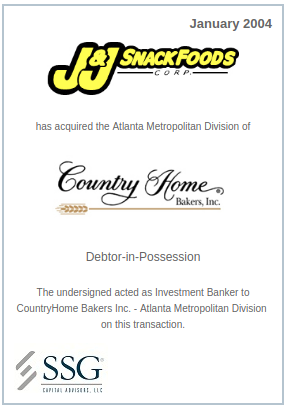