Client Profile
Diamond Glass, Inc. (‘Diamond’ or the ‘Company’) is the second largest provider of automotive glass replacement and repair services in the United States. Diamond has a strong position in its three core business segments: commercial, insurance and consumer. Mature customer relationships are reinforced by an efficient vehicle fleet, three distribution centers and network of sales representatives operating out of 207 locations in 47 states.
Situation
The Company’s financial performance in 2006 led it to violate certain covenants in its financing agreements. While the Company’s financial performance had been improving, and management expected further improvement, it appeared that even under the most optimistic projections the Company would be unable to sustain the debt service obligations it had to its senior secured debt and unsecured noteholders. In addition, both the Company’s senior secured debt and unsecured notes were at maturity. As a result, Diamond filed for protection under Chapter 11 of the United States Bankruptcy Code on April 1, 2008.
Solution
SSG was retained by Diamond pre-petition and quickly negotiated a DIP lending facility as well as a stalking horse Asset Purchase Agreement with Guggenheim Partners to facilitate a Section 363 sale. Thereafter, SSG solicited interest from a broad array of both financial and strategic buyers, facilitated due diligence and negotiated with several interested parties. After SSG conducted a competitive bidding process, a bid by Belron US, Inc. (‘Belron’) was deemed highest and best at the Section 363 sale auction. The sale of Diamond to Belron was approved by the United States Bankruptcy Court for the District of Delaware on June 20, 2008 and the sale transaction closed on June 30, 2008. 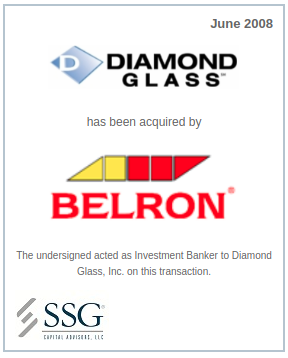