Client Profile
Four Star Products, Inc., was a poultry operation which had grown from a poultry brokerage operation to a full production poultry processing plant in a relatively short period of time.
Situation
Four Star Products incurred a liquidity crisis which was brought on due to production challenges Four Star incurred while attempting to keep up with an increased revenue base.
Solution
SSG privately placed Debtor-in-Possession Financing which allowed Four Star to file for protection under Chapter 11 of the United States Bankruptcy Code in a manner which allowed the Company to rationally explore their strategic alternatives. 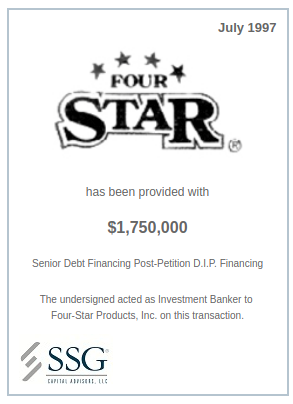