Client Profile
Imperial Home Decor Group Canada, Inc. (“IHDG” or the “Company”), is one of the world’s largest designers, manufacturers and distributors of residential wallcovering products, including traditional wallpaper, borders, wall art and other niche oriented product lines. The Company sells its products primarily through home centers, mass retailers and independent distributors in the United States and Canada.
Situation
IHDG had been adversely impacted over the last decade by the significant down cycle of the global wallcoverings market, the key driver of which has been the substitution of paint for wallcoverings. Despite operational improvements, IHDG had difficulty maintaining consistent profitability amidst its deteriorating base of revenue.
Solution
The immediate sale of the Company was required to provide liquidity for the stakeholders. The balance sheet and corporate structure required that the sale be effected through concurrent insolvency proceedings in both the U.S. and Canada (the manufacturing facility was located in Quebec and part of a Canadian subsidiary). SSG quickly went to market, attracted several offers and ultimately negotiated an asset purchase agreement with Blue Mountain Wallcoverings, which would serve as the stalking horse bidder in the U.S. Section 363 auction. The deal, which closed on January 30, consisted of three separate transactions: U.S. assets under Section 363 of the U.S. Bankruptcy Code, Canadian assets through a receivership proceeding under the Canadian Bankruptcy and Insolvency Act, and the sale of the distribution facility which was not an asset of the Debtor. 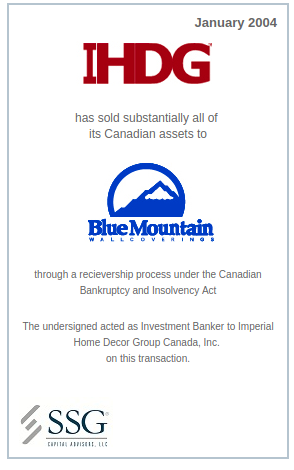