Client Profile
ISE Corporation (“ISE” or the “Company”) is a leading developer, integrator and distributor of hybrid-electric drive systems as well as energy storage systems specifically designed for heavy duty commercial vehicles, primarily those that make frequent starts and stops such as transit buses and heavy short-haul trucks. In the North American transit bus market, the Company is the only commercial provider of gasoline hybrid systems, a leading provider of zero-emission hybrid systems and a provider of diesel hybrid systems. Headquartered outside of San Diego, ISE has an installed base of more than 300 hybrid-electric drive systems (with approximately 14 million accumulated miles) and more than 200 energy storage systems. Transit authorities that utilize the Company’s technology include those in Long Beach, Las Vegas, Chicago, San Diego, British Columbia and London.
Situation
Due to excessive warranty liabilities from legacy contracts, the Company filed for protection under Chapter 11 of the U.S. Bankruptcy Code in the Southern District of California on August 10, 2010. SSG Capital Advisors, LLC, along with Cabrillo Advisors LLC, was retained as the Company’s investment banker to conduct a sale process pursuant to Section 363 of the U.S. Bankruptcy Code.
Solution
The sale process yielded six qualified bidders, each with an interest in different parts of the business. After several rounds of bidding, the business was sold as a going concern to Bluways USA, Inc., a strategic acquirer based in Belgium. The transaction closed on January 31, 2011. 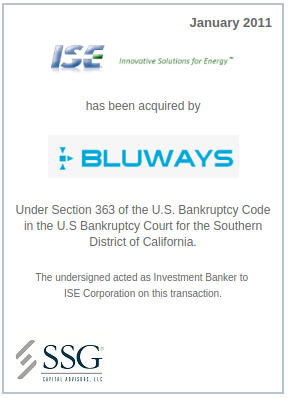