Client Profile
Headquartered in Greenwood, SC with rose breeding operations in Somis, CA, Jackson & Perkins and Park Seed (together, the ‘Company’) are pioneers in direct marketing to consumers. With nearly 140 years of history, the Company has become known for offering ground-breaking and award-winning roses, seeds, plants and other related horticultural items. The Company’s brands, including Wayside Gardens, have become synonymous with quality horticultural products. Today, Jackson & Perkins and Park Seed own and operate multiple online stores and distribute a combined 13 catalog titles, including the very successful Jackson & Perkins Holiday Catalog.
Situation
The Company’s financial performance was negatively affected by the global economic downturn of 2008 and, in particular, the slump in the housing market which has a direct correlation to the demand for the Company’s products. In addition, the Company was plagued in recent years by ownership issues and legal challenges which hampered management’s ability to execute their business plan. Ultimately, liquidity constraints impacted the Company’s ability to purchase inventory, limited order fulfillment and threatened to cause customer disruption. The Company filed for bankruptcy protection on April 2, 2010 in the U. S. Bankruptcy Court for the District of South Carolina.
Solution
The Chapter 11 Trustee hired SSG in May, 2010 to explore a sale of substantially all of the assets of Jackson & Perkins and Park Seed. SSG immediately began to market the businesses and contacted over 100 potential strategic and financial buyers. In June and July 2010, SSG initiated negotiations on a stalking horse bid with Blackstreet which was approved by the Bankruptcy Court on July 27, 2010. SSG worked diligently during July and August, 2010 to re-market the Company and obtain higher and better offers in order to assure the maximum value to the estate. As a result of SSG’s marketing efforts, two additional qualified bidders attended an auction for substantially all of the Company’s assets on August 23, 2010. The auction ultimately delivered a final price approximately 51% higher than the stalking horse bid, committed Blackstreet (the highest bidder) to retain the Company’s employees and significantly increased recoveries to numerous estate constituents. 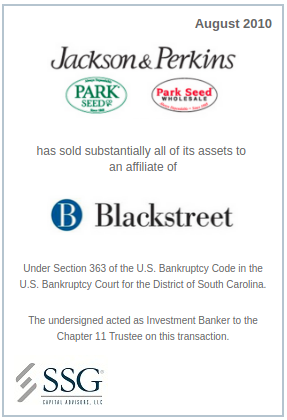