Client Profile
Journal Register Company (“JRC” or the “Company”) was established in 1997 and is a leading online and print provider of local news, sports, business and lifestyle information to an expansive customer base across the country. The Company owns and operates 18 daily newspapers, 127 non-daily newspapers, 237 individual websites, 38 smart phone and digital applications and 19 mobile sites. Over the years, JRC has been transitioning its business model from a predominantly print platform to a “Digital First” platform. The Company’s commitment to being Digital First, entrepreneurial-driven and customer-focused on the media platform of the customer’s choice has allowed JRC to grow into a multi-regional, multi-platform, industry leading media company. Furthermore, JRC’s geographically clustered base of operations enables it to reach a broad spectrum of readers and consumers throughout Greater Philadelphia, Michigan and Greater Detroit, Connecticut, Greater Cleveland and the Capital Saratoga and Mid-Hudson regions of New York State. JRC maintains corporate headquarters in New York, NY and Fairless Hills, PA.
Situation
In recent times, the U.S. newspaper industry has suffered through negative headwinds. The Company met these challenges head on, including filing for bankruptcy under a consensual plan of reorganization in early 2009. As part of the plan, JRC implemented several strategic initiatives to grow and diversify its revenue base, rationalize its cost structure, improve margins and maintain profitability. This included investing heavily in its digital strategy which resulted in digital revenue growth of 235% from year-end 2009 through 2011, compared to only 18.5% for the overall industry during the same timeframe. However, the operational restructuring efforts were not enough to prevent further declines in sales and profitability as the newspaper industry print advertising averaged annual year-over-year declines of almost 9% since the beginning of 2010. The Company thus suffered a lack of liquidity due to the industry trends and substantial lease, tax, trade and pension obligations related to its legacy operations.
Solution
In order to restructure its balance sheet and shed legacy liabilities, JRC determined that a sale of its assets was the best path forward. The Company filed for Chapter 11 protection in the U.S. Bankruptcy Court for the Southern District of New York in September, 2012 to start and then effectuate the sale process. Alden, which acquired substantially all of the senior debt and equity of JRC in mid-2011, agreed to serve as the stalking horse bidder. SSG was retained as the Company’s exclusive investment banker for the purpose of marketing the business and soliciting competing offers to the proposed stalking horse bid. In addition to its role as investment banker, SSG also served as JRC’s exclusive financial advisor throughout the sale process. Alden’s stalking horse offer was ultimately the highest and best price for substantially all of the assets of JRC and the sale closed in early April, 2013. The Chapter 11 sale process enabled all key stakeholders to maximize the value of the Company while preserving the jobs of substantially all of JRC’s employees. 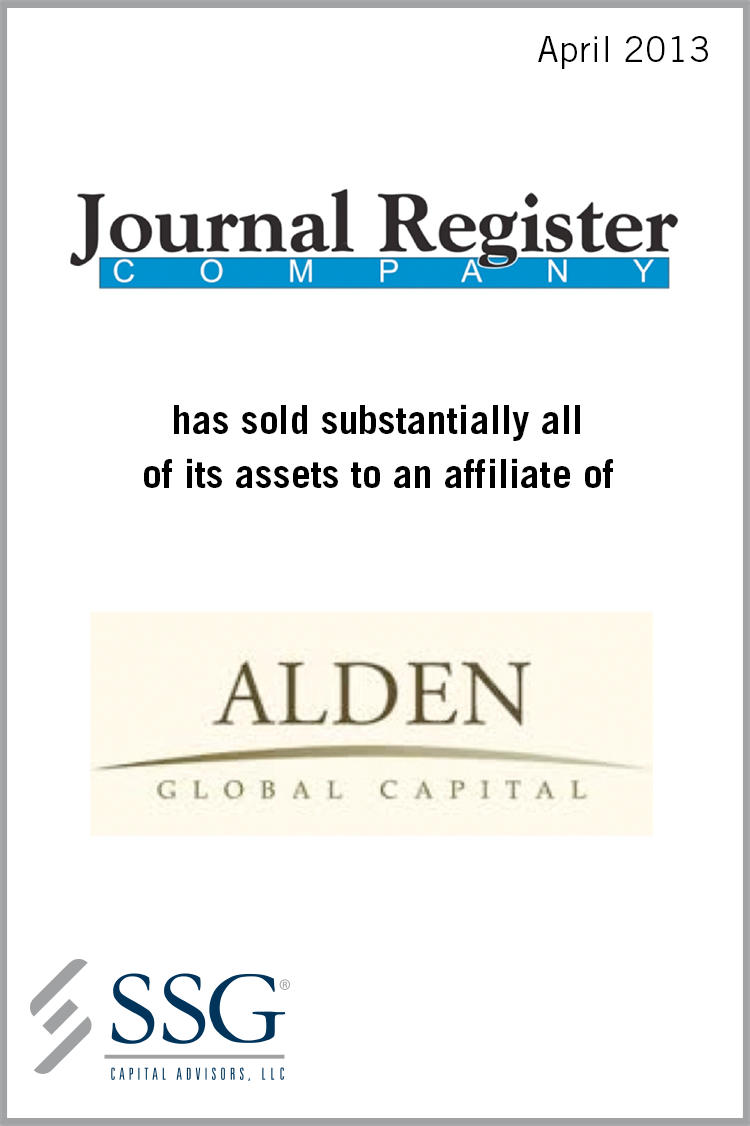