Client Profile
Lehigh Coal & Navigation (‘LCN’ or the ‘Company’) is one of the largest contiguous anthracite coal mines in North America. The Company is located in Schuylkill and Carbon Counties, Pennsylvania and spans over 8,000 acres. The Company, often referred to as ‘Old Company’s Lehigh’, is the successor to one of America’s oldest companies and traces its roots to the eighteenth century.
Situation
As a result of shortages in working capital and delays in bringing renovated facilities online, the Company engaged in limited revenue producing activities between 2001 through mid-2007. Even as those facilities came online in 2007, substantial environmental obligations continued to impact the Company’s ability to fund working capital needs and therefore, impacted LCN’s ability to mine on a scale necessary to reach profitability.
Solution
SSG Capital Advisors, LLC (‘SSG’) was retained by LCN for the purpose of marketing the Company for sale. SSG solicited competing offers to a proposed stalking horse bid of $14.8 million plus the assumption of substantial liabilities. As part of the marketing process, SSG contacted over 150 strategic and financials buyers, including buyers in Asia, Australia, Europe and South America. Ultimately, no overbids were received from any other qualified bidders and the sale of LCN’s assets to BET Investments was approved by the U.S. Bankruptcy Court for the Middle District of Pennsylvania in May 2010. The transaction closed in June 2010. 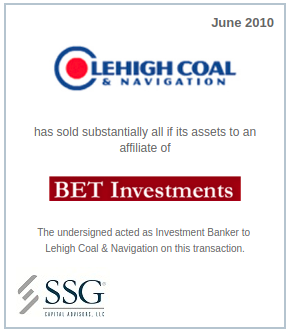