Client Profile
Founded in 2010 and headquartered in Philadelphia, PA, Mark Group, Inc. (“Mark Group” or the “Company”) was a leading provider of energy efficiency services for residential (primary revenue source), utility and commercial customers. With a focus on “whole-home performance,” the Company identified the appropriate mix of products and services to help maximize safety, health, comfort and efficiency (i.e. the Company audited homes to recognize inefficiencies and performed the work necessary to fix them). Mark Group’s market area consisted of over 3.7 million households in Pennsylvania, New Jersey, Maryland, Delaware, Virginia and Massachusetts.
Situation
While Mark Group showed significant cumulative growth in revenue since opening operations in 2010, the Company’s growth trajectory was hindered in 2014 due to a lack of sufficient lead generation. Additionally, Mark Group’s fixed overhead expenses were geared towards an operation with twice the revenue. The combination of slower than expected revenue growth and difficulties controlling margins contributed to the Company’s constrained liquidity position and required continued funding. Mark Group’s parent company is based in the U.K., with operations in Australia and New Zealand as well as the U.S. location. The U.K. parent was going through cost reduction efforts among its operations and could no longer provide additional funding to Mark Group. Given the lack of additional capital available, Mark Group determined that an immediate liquidity solution was necessary.
Solution
SSG was retained in October 2014 as Mark Group’s exclusive investment banker to explore strategic options. Given that a third party investor was not a viable option due to the time and diligence it would require to consummate a transaction, SSG began to explore alternatives to a broad marketing process. Mark Group’s management team, led by Jeff Bartos, worked with SSG to spearhead an effort to purchase the Company’s utility business operations on behalf of ESB Holdings, LLC. With the assistance of its advisors, management was ultimately able to negotiate an agreement with the Company’s U.K. parent that maximized value for all stakeholders. The sale closed in January 2015. 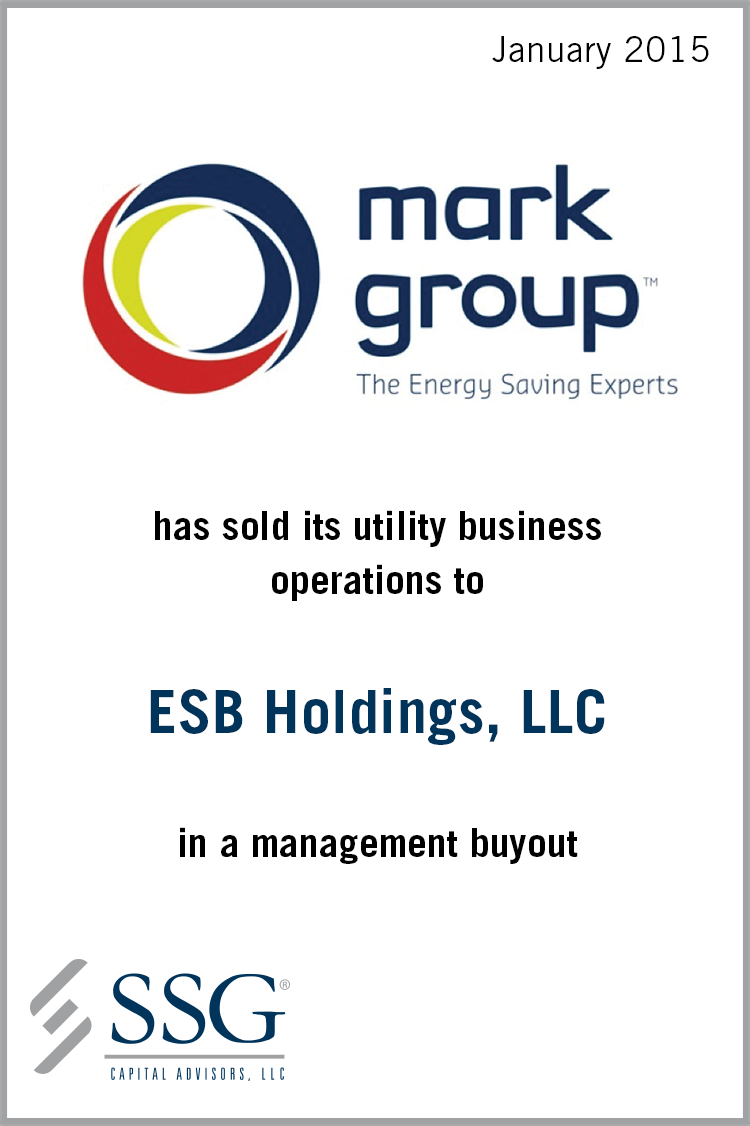