Client Profile
MediaBay, Inc. (or the ‘Company’) is a digital media and publishing company specializing in spoken word audio entertainment that had previously been traded on the NASDAQ market under the symbol ‘MBAY’. The Company operated two distinctive businesses: a digital distribution platform for audiobooks and a publisher and marketer of American radio shows. MediaBay is headquartered in Cedar Knolls, NJ.
Situation
After experiencing liquidity constraints stemming from an unfavorable market response to product launches, MediaBay converted its business operations to center upon a digital distribution platform rather than its original hard-good model. Insufficient revenue generation necessitated the sale of substantially all of the Company’s assets.
Solution
SSG acted as exclusive investment banker to MediaBay during the course of its sale. To maximize value to stakeholders, SSG elected to sell the Company’s assets through an auction process. The Company was marketed to a diverse group of prospective strategic and financial buyers. OTRE, LLC and Cascade Ventures were the highest bidders for MediaBay’s assets during an auction conducted on September 5th, 2007. The sale closed shortly thereafter in September 2007. 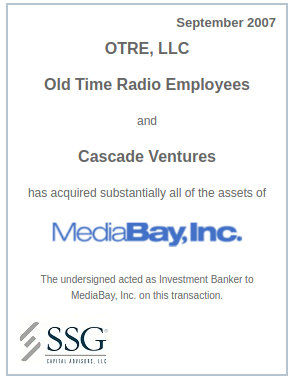