Client Profile
Founded in 1937 and headquartered outside of Boston, Massachusetts, Nancy Sales Company, Inc. (“Nanco” or the “Company”) is one of the largest providers of stuffed animals and other products to the amusement and tourist/resort industries. The Company has earned an excellent reputation for quality and service among its diverse customer base, which includes Six Flags, Seaworld, Universal Studios, Dave and Buster’s, Animaland, and Great Wolf Lodges. The Company offers a wide variety of popular licensed brands, including Domo, Yo Gabba Gabba, the Smurfs, Sesame Street, and SpongeBob.
Situation
After many consecutive years of profitability, the general economic downturn in the United States caused the Company to suffer a significant loss in-season in fiscal 2008 and happened so swiftly that the Company could not downsize fast enough to mitigate the loss. As a result, the Company found itself with a large amount of excess inventory. Although profitability was restored in 2009, the Company faced lingering liquidity issues.
Solution
SSG Capital Advisors was retained to help the Company manage its existing lender relationship and seek new capital. In a very difficult credit environment, SSG helped deliver a new working capital facility that provided the Company with sufficient liquidity to continue its operational turnaround and to restore growth. 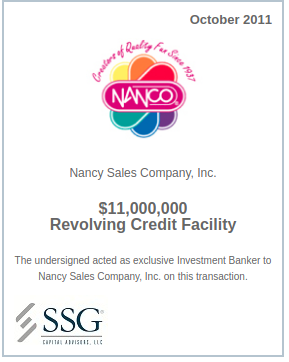