Client Profile
Based in Philadelphia, PA, North Philadelphia Health System (“NPHS” or the “Hospital”) provides mental health and substance addiction treatment services and special programs for patients with behavioral medical disorders and / or extended acute medical conditions. Services include outpatient counseling for alcohol and drug use, a detoxification and rehabilitation unit and several specialized inpatient programs. In addition, NPHS operates the Goldman Clinic, which provides methadone treatment to up to 700 individuals daily. These services are offered through the Hospital’s Girard facility, a licensed 65-bed psychiatric hospital which traces its roots back to 1896.
Situation
The Hospital is heavily dependent on Pennsylvania Medicaid reimbursements. Supplemental funding ceased at the end of 2015 and NPHS was forced to close its St. Joseph’s Hospital (“SJH”) facility in March 2016. In addition to being burdened with overhead that was previously supporting a larger organization, the Hospital had seen general cost increases over the years that were not accompanied by adequate amendments to its per diem reimbursement rates. Amid its large debt load while also facing constrained liquidity from SJH closing costs and ongoing operational losses, the Hospital filed for Chapter 11 protection at the end of December 2016 to preserve its operations.
Solution
SSG was retained as investment banker to NPHS in April 2017 to pursue strategic alternatives including a sale of the Hospital. SSG’s sale process attracted significant interest and multiple offers from both real estate investors and healthcare providers. The robust process ultimately resulted in a competitive auction process where a bid from an affiliate of Iron Stone Partners (“Iron Stone”) was determined to be the highest and best offer for substantially all of the Hospital’s assets. Iron Stone partnered with Community Behavioral Health and the City of Philadelphia under a new lease in order to continue operations at the Hospital with NPHS as the operator. As a result, the Hospital will continue to operate its Girard facility as a going concern, preserving jobs and providing its valuable medical services to patients in the Philadelphia region. 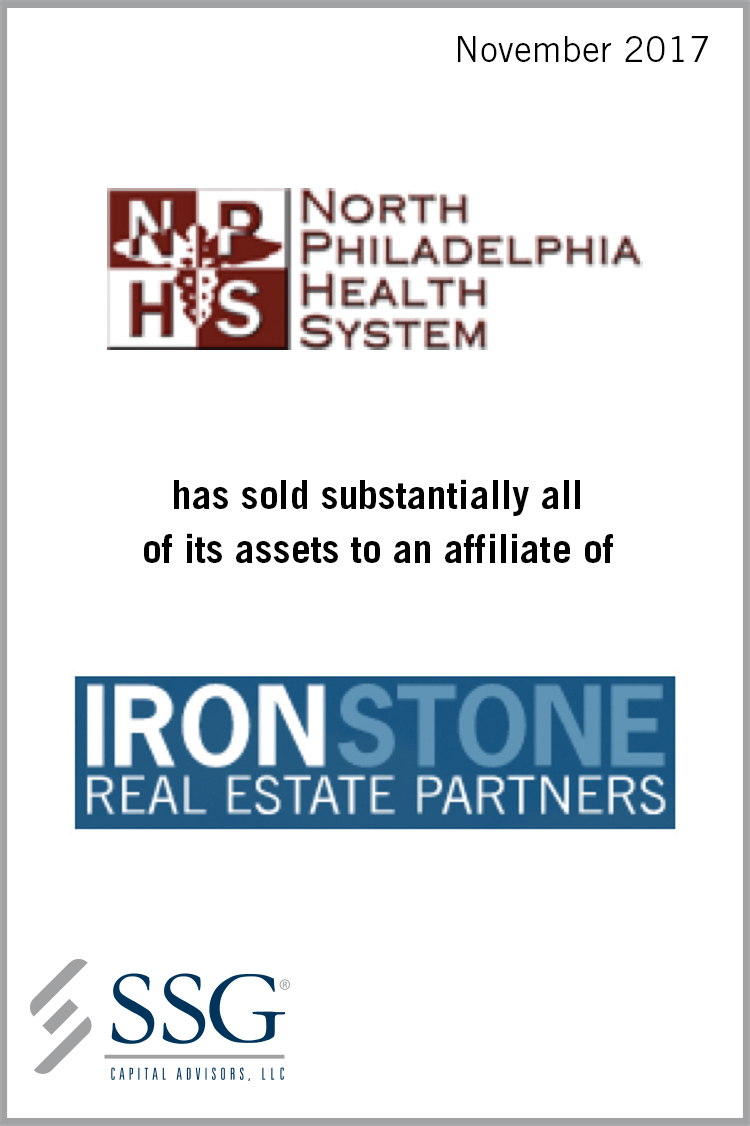