Client Profile
O.K. Industries, Inc. (“O.K.” or the “Company”) is one of the largest vertically integrated poultry companies in the world and generated approximately $610.6 million in revenue during the fiscal year ended April 30, 2011. The Company was founded in 1933 and is headquartered in Fort Smith, Arkansas. O.K. has nearly 1.0 million square feet of facilities from which it processes 140.0 million chickens per year. Through its two processing and two further-processing plants located in Fort Smith, Arkansas; Heavener, Oklahoma; and Muldrow, Oklahoma, O.K. produces value-added poultry products for customers ranging from national chain restaurants to grocery retailers.
Situation
Starting in the summer of 2010, the poultry processing industry faced a sharp increase in the cost of inputs such as corn and soybean. Furthermore, as a result of overcapacity, the poultry processing industry has been unable to pass on the increased cost of inputs to customers. This dynamic has negatively impacted the profitability of O.K. and the entire poultry industry.
Solution
Facing liquidity constraints, O.K. retained SSG Capital Advisors, LLC (“SSG”) to pursue strategic alternatives, including a potential sale of the Company. Leveraging its prior transactional experience in the poultry processing industry as well as its relationships with domestic and international poultry processors and private equity firms with an interest in the poultry processing space, SSG conducted a competitive bidding process for O.K. Ultimately, the offer made by Industrias Bachoco S.A.B. de C.V. was deemed to be the highest and best offer for all stakeholders. The transaction closed on November 1, 2011 for a purchase price of approximately $93.4 million. 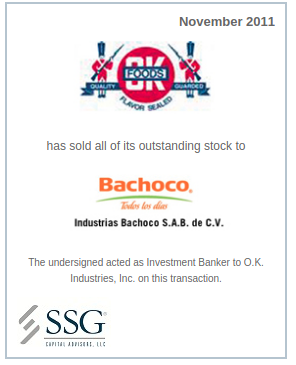