Client Profile
PCAA, headquartered in Philadelphia, PA, is one of the largest domestic, privately-owned operators of off-site airport (“off-airport”) parking services. PCAA’s parking service options include valet, self-park, covered, indoor and uncovered parking. Currently, PCAA operates over 25 facilities throughout the United States under the AviStar, SkyPark and FastTrack brands and controls approximately 40,000 off-airport parking spaces. The Company’s facilities are located near eighteen airports throughout the United States, including seven of ten of the busiest domestic airports.
Situation
PCAA hired SSG in May 2009 to explore strategic alternatives, including a sale of substantially all of PCAA’s assets. In January 2010, PCAA filed for voluntary bankruptcy protection under Chapter 11 of the United States Bankruptcy Code in the District of Delaware. Simultaneously with filing Chapter 11, PCAA entered into an asset purchase agreement with a stalking horse bidder. The stalking horse bid was in the amount of $111.5 million.
Solution
During PCAA’s Chapter 11 proceedings, SSG re-marketed the Company to obtain higher and better offers to maximize value to the estate. As a result of SSG’s marketing efforts, an auction for substantially all of PCAA’s assets was held on April 27, 2010. The Section 363 auction ultimately delivered a final price of $141.0 million through a sale to an affiliate of Aurora Capital Group, a price which was approximately 30% higher than the stalking horse bid resulting in increased recoveries to numerous estate constituents. The sale was effectuated through a confirmed Chapter 11 Plan of Reorganization. Aurora Capital Group is a Los Angeles-based private equity firm with approximately $2 billion of assets under management. Aurora makes investments in market leading companies in partnership with proven management teams. Aurora Resurgence, a sister fund of Aurora Capital, focuses on investing in the debt and equity securities of middle-market companies facing operational or financial challenges. 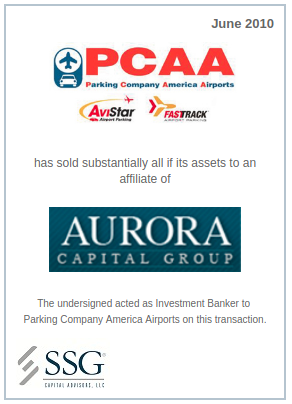