Client Profile
Pharmaceutical Formulations, Inc.(“PFI” or the “Company”)Debtor-in-Possession, is a publicly-traded, private label manufacturer and distributor of non-prescription (sometimes called “over-the-counter” or “OTC”) solid dose pharmaceutical products in the United States and powdered, dietary natural fiber supplements which are sold in the United States and several foreign countries. Such products, which are made in tablet, caplet, capsule or powdered form, are primarily sold under the customers’ store brands or other private labels, manufactured under contract for national brand pharmaceutical companies or sold in bulk to others who repackage them for sale.
Situation
PFI faced certain operational and financial difficulties stemming from the competitive pharmaceutical industry. Increased consolidation among major retailers, as well as the increasing popularity of reverse bids and on-line auctions, forced the Company to price its products more competitively. PFI was negatively impacted by these changes and, as such, was unable to reduce costs quickly enough to adjust for these price reductions. After evaluating numerous strategic alternatives, management determined that the sale of the business provided the most effective means to maximize value to all shareholders. The Company filed for protection under Chapter 11 of the U.S. Bankruptcy Code on July 11, 2005.
Solution
SSG Capital Advisors, L.P. was retained by Pharmaceutical Formulations, Inc. on June 15, 2005 as the exclusive investment banker regarding the sale of substantially all of the assets of PFI. On July 14, 2005, proposed bidding procedures for the PFI Section 363 sale process were filed with the Bankruptcy Court for the District of Delaware with Leiner Healthcare Products LLC as the stalking horse buyer. The sale of substantially all of PFI’s assets to Leiner Healthcare Products LLC was approved by the Court on September 22, 2005 and the transaction closed on September 26, 2005. The SSG professionals involved in the transaction were J. Scott Victor (Managing Director), Robert Smith (Managing Director) and Glenn Bernabeo (Vice President). 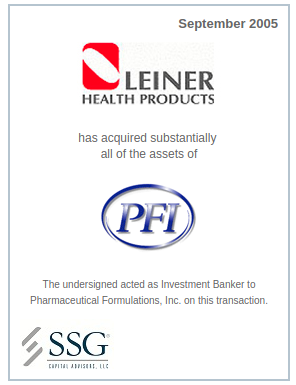