Client Profile
Ritz Camera Centers, (“Ritz” or the “Company”)headquartered in Beltsville, Maryland and founded in 1918, is the largest photography specialty retail chain in the U. S. Operating under the Ritz Camera and Wolf Camera brands, the Company maintained approximately 800 stores in 46 states and generated approximately $1 billion in annual revenue. In addition to Ritz’s retail operations, the Company also maintains the RitzPix.com website, one of the largest and fastest growing online imaging sites.
Situation
Due to macroeconomic factors which led to weak sales during the 2008 Christmas holiday in 2008 and the growing popularity and transformation in the photography industry to digital technology, Ritz’s retail operations had to be downsized to its largest and most profitable stores. The Company filed Chapter 11 bankruptcy proceeding in the United States Bankruptcy Court for the District of Delaware in February 2009 and immediately went through an operational restructuring that including closing a substantially number of smaller and less profitable stores and retaining the largest 375 stores and dramatically reducing SG&A.
Solution
SSG was retained by David Ritz and the RCI Acquisition team to structure, negotiate and raise the capital to buy the business out of bankruptcy. David Ritz and Fred Lerner, on behalf of RCI Acquisition, worked with SSG to spearhead an effort to buy the Company out of Chapter 11 and maintain it as a going concern. Facing a stalking horse bid from a private equity firm and competing bids from the country’s largest liquidators, RCI Acquisition and the SSG team outlasted all other bidders after a 24-hour all night auction on July 21 to emerge as the highest and best bid and only offer to maintain Ritz Camera Centers as a going concern. The sale was approved by the Bankruptcy Court and closed in July, 2009. In a time when most retailers have been unable to survive bankruptcy, the acquisition of Ritz Camera Centers as a going concern and saving jobs of thousands of employees is a true success story. 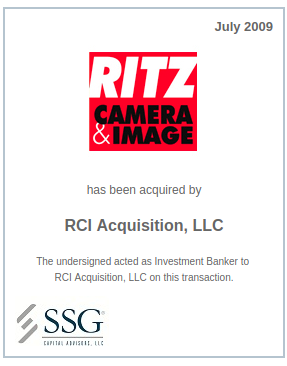