Client Profile
Sega GameWorks, LLC (“Sega” or the “Company”)is an operator of location-based entertainment centers that fully integrate games, dining and drinks. The Company operates 18 domestic sites across the United States and in addition has international interests through licensed franchise operations.
Situation
On March 9, 2004, Sega GameWorks, LLC filed a voluntary petition for relief under Chapter 11 of the Bankruptcy Code in the United States Bankruptcy Court for the Central District of California, Los Angeles Division. While in bankruptcy, the Company continued to operate as Debtor-In-Possession.
Solution
SSG was retained to evaluate the Debtors’ strategic reorganization alternatives, including the sale of the Debtors’ business as a going concern. Sega GameWorks, LLC and SSG ultimately determined that the highest value would be achieved through a sale of the Company. Accordingly, SSG solicited purchase proposals from several prospective buyers, selected a stalking horse bidder for all of the Company’s locations, and assisted the Debtors in conducting a competitive Section 363 auction that resulted in over a 60% increase in the purchase price above the original stalking horse bid. The Company was ultimately acquired by Sega Entertainment U.S.A, Inc., a subsidiary of Sega Corporation and the transaction closed in May 2005. 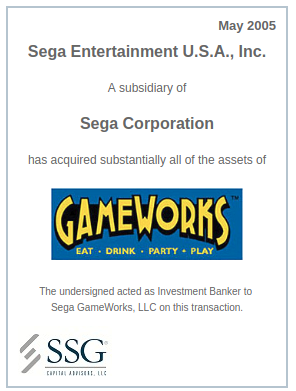