Client Profile
Urban Broadcasting Corporation, Debtor-In-Possession, is an independent UHF television station that broadcasts in the Washington, DC market. The Company filed for protection under Chapter 11 of the United States Bankruptcy Code.
Situation
The Company could not service its secured indebtedness, which was eight times its revenue.
Solution
SSG was retained to explore both a refinancing and a possible sale of the company under Section 363 of the U.S. Bankruptcy Code. A refinancing of the Company’s secured indebtedness proved challenging. However, SSG was able to generate substantial interest, culminating in Univision Communications, Inc. being selected as the acquirer at the 363 auction. The final bid was $60.0 million, which was 20% higher than the platform bid and 20 times revenue. 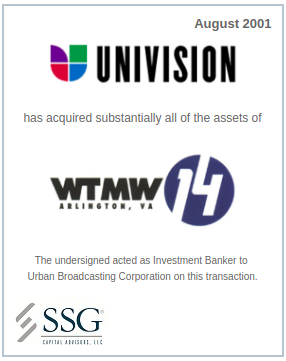