Client Profile
U.S. Wireless Corporation (NASDAQ: USWC), Debtor-in-Possession, has developed and patented a network-based proprietary technology to locate mobile telephone subscribers by recognizing the spatial pattern of the radio waves radiating from the subscribers’ handsets. As of April 2001, the Company’s market capitalization was $56 million.
Situation
The Company was burning cash and only had funds for two months of operation when SSG was engaged.
Solution
SSG was the exclusive financial advisor in the sale of the business, as a going concern, which included intellectual property and working capital, through Section 363 of the United States Bankruptcy Code. The sale of U.S. Wireless Corporation was approved by the United States Bankruptcy Court on November 29, 2001 to Trafficmaster. The transaction closed on December 10, 2001. 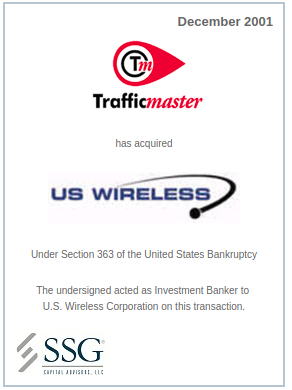