SSG Advises Utica Leaseco, LLC on the Sale of the Assets of Alta Devices to Ubiquity Solar Inc. 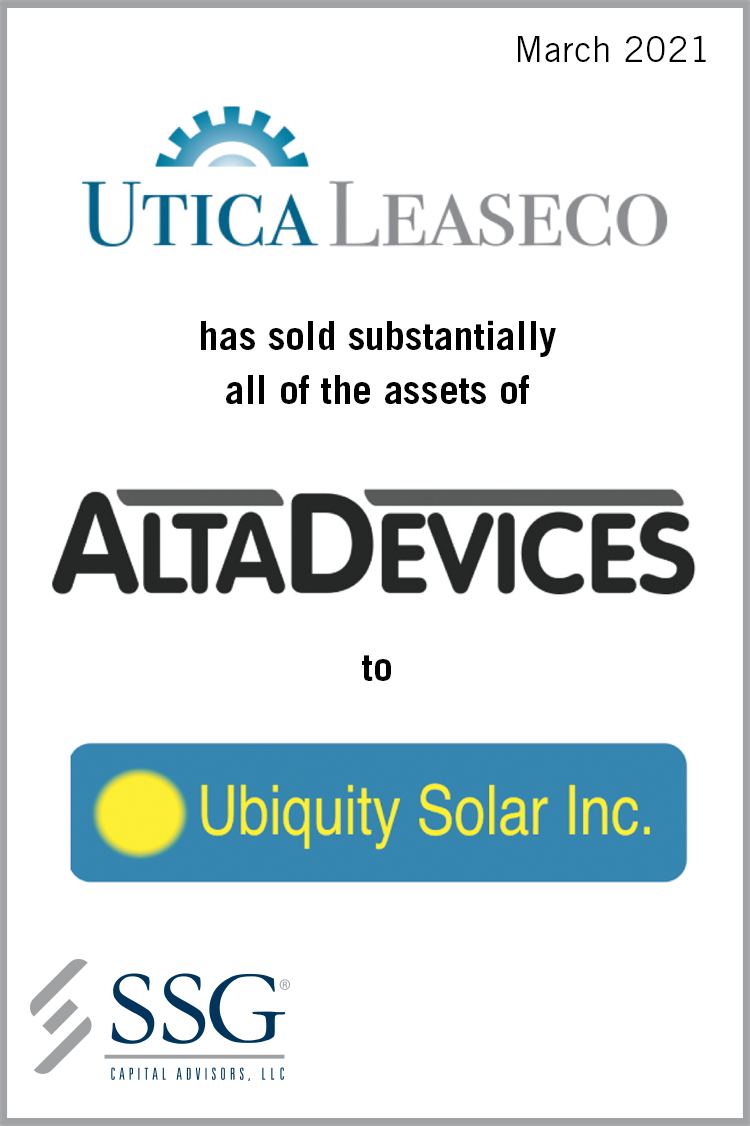 SSG Capital Advisors, LLC (“SSG”) acted as the investment banker to Utica Leaseco, LLC (“Utica” or the “Company”) on the sale of the assets of Alta Devices (“Alta”) to Ubiquity Solar Inc. (“Ubiquity” or the “Buyer”). The assets included intellectual property, research and development, production equipment, and inventory. The transaction closed in March 2021.

Since its inception in 2008 until its California production facility was shuttered in late 2019, Alta fabricated gallium arsenide solar cells, which are highly efficient and resistant to moisture and UV radiation in contrast to the more widely used silicon. Alta’s cells once held the world record for the most efficient single-junction solar cell. As such, the lightweight, flexible cells have been highly sought after in the aerospace, HALE (High Altitude Long Endurance), UAV (Unmanned Aerial Vehicle), HAPS (High Altitude Pseudo-Satellite), LEOS (Low Earth Orbit Satellites), airship, and defense contracting industries.

As a result of issues unrelated to Alta, its corporate parent was unable to provide support to continue funding research and commercialization of the technology and the assets were ultimately conveyed to Utica. SSG was retained to conduct a comprehensive marketing process to find a new owner. SSG canvassed a wide range of investors on a global scale and attracted interest from multiple international parties. The sale to Ubiquity proved to be the best solution given its plans to integrate the gallium arsenide assets with its silicon-based photovoltaic wafer, cell and modulation operation. Additionally, the sale allows the assets to remain in North America.