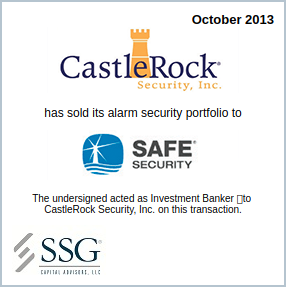 SSG Capital Advisors, LLC (“SSG”) acted as the investment banker to CastleRock Security Holdings, Inc. and its subsidiary (“CastleRock” or the “Company”) in the sale of its security alarm portfolio to Security Alarm Financing Enterprises, L.P. (“SAFE Security”). The sale closed in October 2013.

SSG was retained as CastleRock’s investment banker to explore a sale of the Company’s alarm portfolio. SSG conducted a comprehensive marketing process which resulted in a number of offers from industry-leading companies in the security alarm space. Working closely with MorrisAnderson, the Company’s financial advisor, SSG was able to negotiate and close the transaction quickly for the benefit of CastleRock’s stakeholders. Founded in 1988, SAFE Security consistently ranks among the top 30 largest security alarm companies in the United States, and is one of the few fully national alarm companies with operations in 50 states, Puerto Rico and Canada.