SSG Advises Green Flash Brewing Co. in the Sale of its California and Nebraska Operations to an Affiliate of Muirlands Capital, LLC 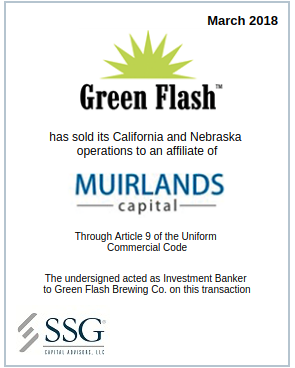 SSG Capital Advisors, LLC (“SSG”) acted as the investment banker to Green Flash Brewing Co. (“Green Flash” or the “Company”) in the sale of its California and Nebraska operations to an affiliate of Muirlands Capital, LLC (“Muirlands”). The sale was effectuated through Article 9 of the Uniform Commercial Code and closed in March 2018.

Green Flash grew rapidly since establishing its initial operation in Southern California. However, after opening a new facility in Virginia and nationalizing distribution in 2015, the Company encountered challenges as it faced increased competition and capacity utilization issues. To address resulting liquidity constraints, management implemented an operational restructuring plan that included rationalizing its distribution network and overhead.

SSG conducted a comprehensive marketing process on an expedited basis, contacting a broad universe of strategic and financial buyers to achieve an optimal outcome for the Company and its stakeholders. The process attracted several bids from interested parties with Muirlands ultimately submitting the most compelling offer. SSG’s ability to solicit offers from a broad universe of buyers in a fast-tracked process enabled the Company to maximize value, preserve jobs and maintain the loyalty of vendors and customers.

Founded in 2014, Muirlands is a lower middle market private equity firm focused on investing in growth-oriented businesses across industry sectors in partnership with experienced operating executives.