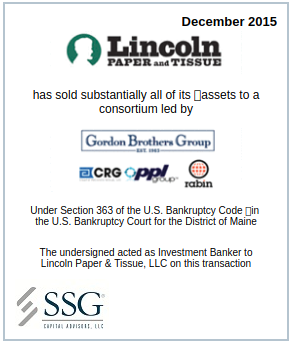 SSG Capital Advisors, LLC (“SSG”) acted as the investment banker to Lincoln Paper & Tissue, LLC (“Lincoln” or the “Company”) in the sale of substantially all of its assets to Gordon Brothers Commercial & Industrial, LLC, Capital Recovery Group, LLC, PPL Group, LLC and Rabin Worldwide, Inc. The sale was effectuated through a Chapter 11 Section 363 process in the U.S. Bankruptcy Court for the District of Maine. The transaction closed in December 2015.

Lincoln is one of the most recognized producers and a domestic leader in colored and specialty tissue products. In November 2013, Lincoln was forced to shut its pulping and papermaking operations following a boiler explosion which disrupted its ability to produce its own wood pulp and manufacture non-tissue paper. In the aftermath, the Company transitioned from a tissue mill supported by an integrated kraft pulp mill to a non-integrated operation. The costs of the reconfiguration efforts, along with relatively unfavorable parent roll markets throughout 2014 into the first half of 2015, adversely impacted revenue, profitability and liquidity. Ultimately, the Company’s constrained liquidity and mechanics liens liabilities precipitated Lincoln seeking Chapter 11 bankruptcy protection in September 2015 and provided the venue to effectuate a sale transaction.

SSG was retained in April 2015 to evaluate strategic alternatives; including a sale of all or a portion of the assets, joint venture partnership or minority control investment. SSG conducted a comprehensive marketing process to a wide universe of international and domestic buyers to structure the optimal solution for Lincoln. Several parties engaged in a thorough review of the business and submitted offers for all or a part of the assets. Reich Brothers served as the stalking horse bidder. In addition to the stalking horse offer, the Company received three competing qualified bids. Upon conclusion of the auction, the consortium led by Gordon Brothers Commercial and Industrial, LLC was ultimately deemed to be the highest and best bid.