SSG Advises Mid-States Supply Company, Inc. in the Sale of Substantially All of its Assets to an Affiliate of Staple Street Capital 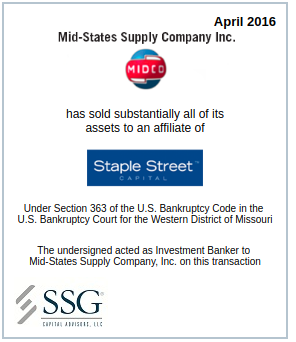 SSG Capital Advisors, LLC (“SSG”) acted as the investment banker to Mid-States Supply Company, Inc. (“Mid-States” or the “Company”) in the sale of substantially all of its assets to an affiliate of Staple Street Capital (“Staple Street”). The sale was effectuated through a Chapter 11 Section 363 process in the U.S. Bankruptcy Court for the Western District of Missouri. The transaction closed in April 2016.

Mid-States steadily increased sales over the last 40 years and was profitable each year over that same period. As the Company experienced double-digit revenue and EBITDA growth from 2012 through 2015, significant investments in working capital drove an increase in the Company’s outstanding revolving line of credit balance. A confluence of factors, including the demand for inventory, diversity in the customer base (meaning a broad demand for stocked product) and a rapid decline in the oil and gas exploration and production (“E&P”) sector, kept inventory, payables and outstanding debt at unsatisfactory levels. Investments in inventory coupled with the decline in revenue from the E&P sector exhausted the Company’s liquidity.

SSG and Frontier Investment Banking (“Frontier”), previously engaged by the Company since October 2015, were jointly retained by Mid-States in January 2016 to evaluate strategic alternatives. In February 2016, Mid-States filed for Chapter 11 bankruptcy protection to avoid further deterioration of its business and to attempt to effectuate a sale process to retain the value of its assets. The Company secured debtor-in-possession (“DIP”) financing from its existing lender. SSG conducted a comprehensive, post-petition marketing process, contacting a broad universe of both strategic and financial buyers to achieve an optimal outcome for the Company and its key stakeholders. Staple Street’s going concern offer was ultimately deemed to be the highest and best offer for substantially all of the Company’s assets following the conclusion of an auction against a competing club bid for the assets and negotiations to improve the final bid of Staple Street.