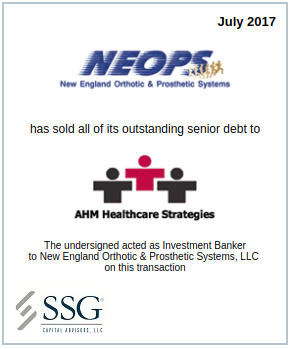 SSG Capital Advisors, LLC (“SSG”) acted as the investment banker to New England Orthotic & Prosthetic Systems, LLC and its affiliates (collectively, “NEOPS” or the “Company”) in the sale of all of its outstanding senior debt to AHM Healthcare Strategies (“AHM”), an affiliate of Eschen Prosthetic and Orthotic Laboratories, Inc. (“Eschen”). The debt sale closed in July 2017. Additionally, SSG provided expert valuation services to NEOPS to help facilitate a Plan of Reorganization (the “Plan”) in the U.S. Bankruptcy Court for the District of Connecticut, New Haven Division. The Plan was confirmed in February 2018.

NEOPS was founded in 1998 to create a more “practitioner- and patient-friendly” orthotic and prosthetic company with a focus on the northeastern United States. The Company provides patients with comprehensive orthotic, prosthetic and compression therapy services as well as cranial orthosis. In addition to over twenty branch locations, NEOPS operates a fabrication facility where it manufactures custom products. The Company has steadily expanded its footprint through a combination of new branch openings and acquisitions of competitors in its targeted geographies.

Due to constrained liquidity and its adverse impact on operations, SSG was retained in April 2017 as NEOPS’s exclusive investment banker to explore strategic alternatives, including a refinancing of the existing indebtedness or a sale of the Company. SSG conducted an expedited marketing process that resulted in a wide range of interest from strategic and financial buyers. Ultimately, the offer from AHM to acquire the Company’s senior debt provided the highest value to the Company’s stakeholders.

After closing the sale of its senior debt, NEOPS filed for Chapter 11 protection in the District of Connecticut, New Haven Division to convert the senior debt to equity control. SSG was re-retained by NEOPS to prepare an enterprise valuation of the Company and assist in the negotiations during the Plan confirmation process. The Plan was ultimately confirmed in February 2018. The two transactions allowed NEOPS to continue to operate as a going-concern, save jobs and provide orthotic and prosthetic services to its patients.

AHM provides a variety of services in the medical device and services areas with a focus in orthopedics, rehabilitation and consumer driven healthcare. Eschen is a provider of orthotic and prosthetic products and services throughout the New York metropolitan area.

*As of February 2018, Of Counsel with Underberg & Kessler LLP