SSG Advises the One Source Companies on Multiple Transactions 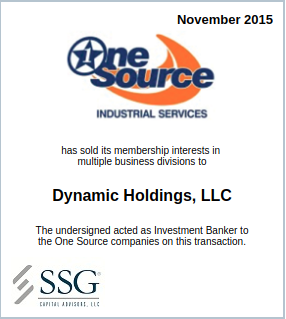 SSG Capital Advisors, LLC (“SSG”) acted as the investment banker to the One Source companies (collectively with its affiliates and subsidiaries, “One Source” or the “Company”) on refinancing its working capital facility with Briar Capital L.P. (“Briar”) and the sale of its membership interests in multiple business divisions to Dynamic Holdings, LLC (“Dynamic”). The transactions closed in October and November 2015, respectively.

Plunging oil prices in late 2014 exerted tremendous pressure on companies in the oil and gas energy sector with oilfield service companies taking one of the biggest hits. Oilfield service companies were squeezed by larger exploration and production companies that were focused on cutting costs and improving cash flow. The industry decline coupled with One Source’s significant debt burden led to certain entities of the Company filing for Chapter 11 in December 2014 and January 2015. One Source engaged SSG to evaluate strategic alternatives to help restructure the Company.

The Company’s pre-petition lender initially continued to support its factoring agreement with One Source. However, in order to reduce its portfolio exposure to energy companies, the lender significantly modified the terms of the factoring agreement which ultimately led the Company to seek an alternate source of financing. SSG contacted a wide range of potential lenders to discuss a new financing facility. While several parties submitted competitive offers, the term sheet from Briar was determined to be the best solution. SSG’s experience in identifying lenders and running an expedited financing process enabled the Company to preserve liquidity. The transaction closed in October 2015.

In addition to replacing its lender, some of the alternatives considered by One Source and SSG included marketing non-core assets and business units for sale, implementing operational initiatives, and ultimately restructuring the Company around core businesses. While management believed that they had derived a configuration for the businesses which would allow for them to operate on a profitable basis, the cyclical nature of the businesses and time required to implement the plan made a standalone restructuring impossible.

One Source and its advisors concluded that the best option was to sell the Company’s membership interests in its core business units to Dynamic, a group of managers who presented an offer to assume all the outstanding liabilities connected with the purchased assets and provide additional cash to the estate. The sale enabled One Source to maximize value while preserving a significant number of jobs and maintaining the loyalty of its customer base. The transaction closed in November 2015.