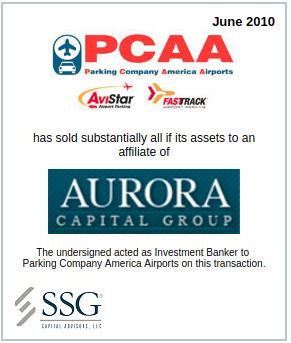 We are pleased to inform you that SSG Capital Advisors, LLC (“SSG”) acted as the exclusive investment banker to Parking Company America Airports (“PCAA” or the “Debtor”) in its sale to an affiliate of Aurora Capital Group (“Aurora”) through a Section 363 auction pursuant to a Chapter 11 Plan under the United States Bankruptcy Code in the U.S. Bankruptcy Court for the District of Delaware. The sale and plan were confirmed on May 14, 2010 and the transaction closed on June 2, 2010.

PCAA, headquartered in Philadelphia, PA, is one of the largest domestic, privately-owned operators of off-site airport (“off-airport”) parking services. PCAA’s parking service options include valet, self-park, covered, indoor and uncovered parking. Currently, PCAA operates over 25 facilities throughout the United States under the AviStar, SkyPark and FastTrack brands and controls over 40,000 off-airport parking spaces. The Company’s facilities are located near twenty airports throughout the United States including seven of ten of the busiest domestic airports.

PCAA hired SSG in May 2009 to explore strategic alternatives, including a sale of substantially all of PCAA’s assets. In January 2010, PCAA filed for voluntary bankruptcy protection under Chapter 11 of the United States Bankruptcy Code in the District of Delaware. Simultaneously with filing Chapter 11, PCAA entered into an asset purchase agreement with a stalking horse bidder. The stalking horse bid was in the amount of $111.5 million. During PCAA’s Chapter 11 proceedings, SSG re-marketed the Company to obtain higher and better offers to maximize value to the estate. As a result of SSG’s marketing efforts, an auction for substantially all of PCAA’s assets was held on April 27, 2010. The auction ultimately delivered a final price of $141.0 million, approximately 30% higher than the stalking horse bid resulting in increased recoveries to numerous estate constituents.

About SSG Capital Advisors, LLC
SSG is a leading boutique investment bank dedicated to representing middle market clients in restructuring and special situations, both in and out of bankruptcy proceedings. SSG provides its clients with comprehensive advisory services in the areas of mergers and acquisitions, capital raises, financial restructuring and valuation. SSG’s professionals have completed over 160 transactions since 2001 and are leaders in the industry.