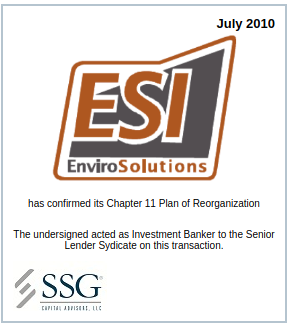 We are pleased to announce that SSG Capital Advisors, LLC (“SSG”) acted as the exclusive investment banker to the Senior Lender Syndicate of EnviroSolutions Holdings, Inc. (“ESI”) in the restructuring of ESI’s credit facilities and equity pursuant to a pre-arranged Chapter 11 Plan of Reorganization (the “Plan”) under the United States Bankruptcy Code in the U.S. Bankruptcy Court for the Southern District of New York. The Plan was confirmed on July 22, 2010 and the transaction closed on July 29, 2010.

ESI is a leading vertically integrated municipal solid waste and construction and demolition waste disposal company, serving a broad customer base, including commercial, construction, recycling and federal, state and local governments. Anchored by strategically positioned landfills in Kentucky, Virginia and West Virginia and transfer stations in Maryland and New Jersey, ESI services the Northeast and Mid-Atlantic regions, both of which are densely populated and landfill capacity-constrained. ESI operates a system of modern and highly scalable state-of-the-art waste disposal assets that drive cash flow growth through internalizing waste streams. With significant investments over the past three years to expand its infrastructure and capacity, including new transfer stations and landfill expansion, ESI is well positioned for future growth opportunities, such as new municipal contracts up for bid and coal ash.

SSG is a leading boutique investment bank dedicated to representing middle market clients in restructuring and special situations, both in and out of bankruptcy proceedings. SSG provides its clients with comprehensive advisory services in the areas of mergers and acquisitions, capital raises, financial restructurings and valuations. SSG’s professionals have completed over 170 transactions since 2001 and are among the leaders in the industry.